Amsterdam is home to many hidden places that can be easily overlooked at first glance without a private guide. It took us years of walking and biking around all over Amsterdam to stumble upon such secrets. So pretty hard to make a list of our top 10 hidden gems of Amsterdam 😉

Here are our top favorite hidden gems in the city in which you can walk around and explore the secrets of the Dutch capital.

The movies art house cinema is where you can enjoy a screening in an art deco setting. It’s one of Amsterdam’s oldest cinemas and has been in use since 1912. The cinema is found in Haarlemmerdijk, one of the city’s oldest dikes.

The cinema has managed to preserve its unique look even as the street it is on has become full of high-end shops. There is also an in-house restaurant where you can enjoy a drink or some food in a unique decor.

2. Statue of the Woodcutter

A fascinating piece of art hidden in plain sight is the statue of a little man sawing the branch he is perched on. Many tourists pass by this 50-centimeter statue without noticing it, even though the tree is located in a very popular place, which is vis-a-vis the bridge from the Leidseplein.

Nobody knows who created this small bronze statue, which has been here since 30 January, 1989. As the statue was placed here just a day before the birthday of former Queen Beatrix, many locals have speculated that the piece was either commissioned by Beatrix or made by her. 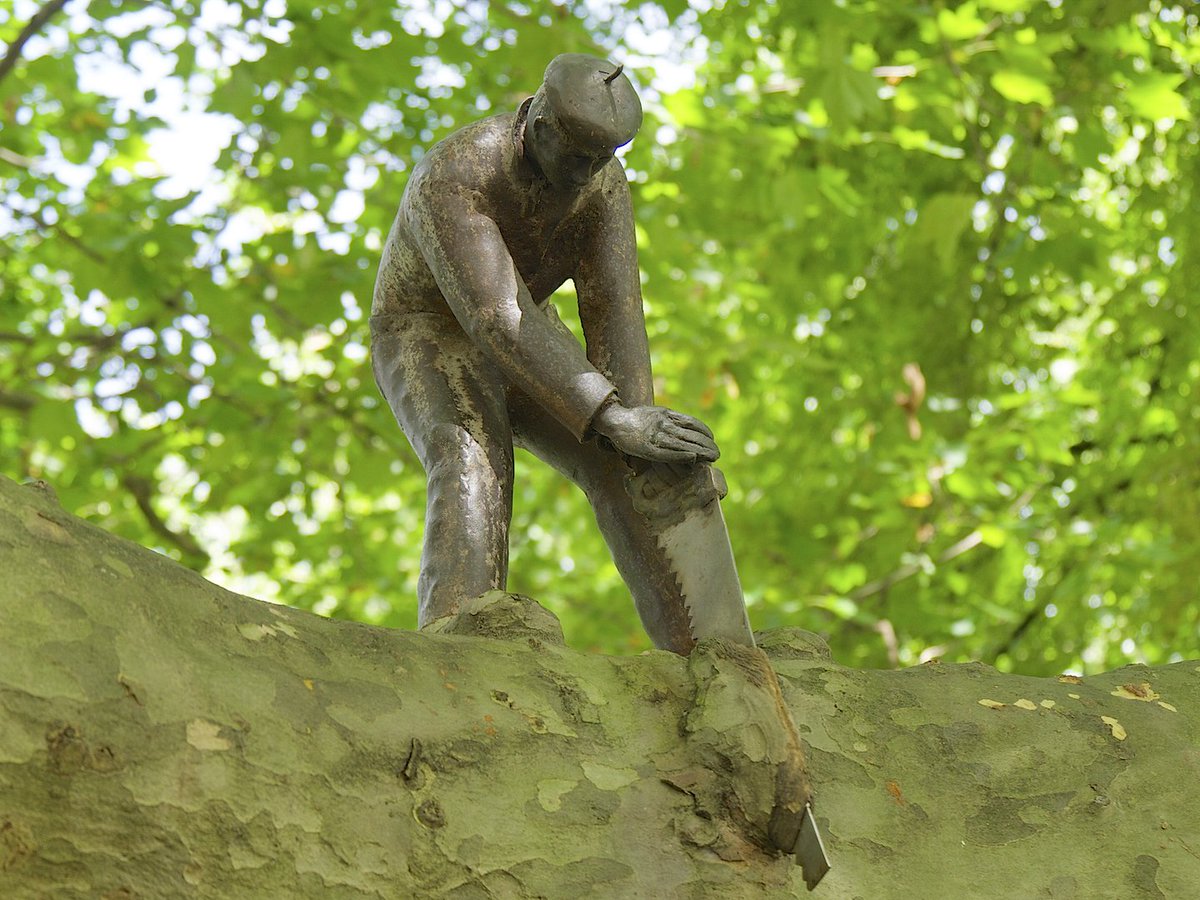 De Hollandsche Manege is an obscure gem of Amsterdam which is only given away by the smell of horses. This horse stable and equestrian school can be found on the Overtoom street, neighboring Vondelpark. Those that are not particularly interested in riding can serve a beer at de Hollandse Manege bar and watch the majestic horses trot and gallop.

‘t Nieuwe Diep is a distillery and bar which can’t be found on Google Maps that easily. This is because it is located in an old pump house from the 1880’s – hidden in Amsterdam Oost’s Flevopark. The park has large grass fields with ponds of different sizes that connect to the IJ River (pronounced eye-river).
In the summertime, when the weather is nice, you can take a seat at one of the tables outside and enjoy the view of the surrounding gardens and ponds. In addition to offering beer, soda, and snacks, they also have a variety of homemade jenever. 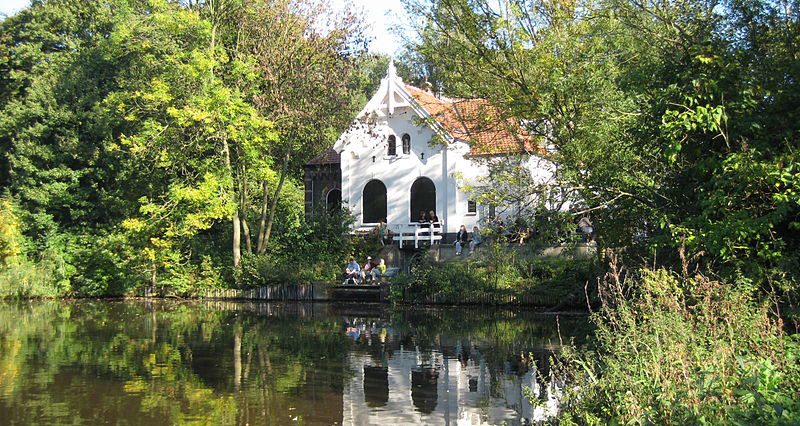 Ons’ Lieve Heer op Solder is the epitome of hidden. This 17th-century house hides a secret Catholic church in its attic.
The Catholic Church was built during the 1660s on the top three floors of a canal house. This “schuilkerk,” or “clandestine church,” served as a secret place where Catholic people practiced their religion. This is because, in the 17th century, Dutch reformed their Church and Catholicism was banned. Congregants were unable to worship in public without facing severe punishment.

The canal house was built in 1630 on the Oudezijds Voorburgwal, a 14th-century canal. Nowadays, the building serves as a museum that welcomes people to explore the old church and the original canal house. The museum was publicly opened on 28 April 1888, which makes it Amsterdam’s second oldest museum, after Rijksmuseum. Religious ceremonies, such as Mass, still take place here on Sundays.

In West Amsterdams traffic-free neighborhood, there is a hotel room which resides in its own mini tower. Built in 1897 as part of Amsterdam’s waterworks, Hotel de Windketel is now a small luxurious apartment. It’s surprisingly affordable to stay at de Windketel, but be quick as it sells out quickly.

The mini houses were created by a local advertising agency called Natwerk, when they noticed an inconsistency in the street’s numbering. They thought it was odd that the addresses jumped from 54 to 70 and so they set up these mini houses to make up for the absent addresses. (see picture at the top).

We’re not talking about regular houses that happen to be small. These are ant-sized houses that are hidden in the small nooks between buildings. They can be spotted near Noordermarkt (Northern Market), one of the city’s oldest squares, if you have the time to look for them. 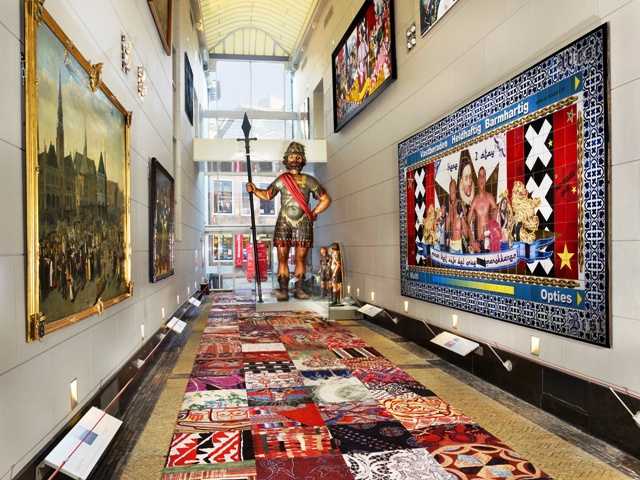 8. Free Hallway of the Amsterdam Museum

On Kalverstraat (Calves Street) / St. Luciensteeg, there is a small gallery passageway that takes you to the Amsterdam Museum – which you can access for free. On its walls, you can find paintings by Dutch Masters as well as artwork from modern times. It provides a fairly complete overview on Amsterdam history. More so than anything else – because Dutch people love free stuff.

The Papists’ Island is one of the oldest cafes of Amsterdam and was built back when practicing Catholicism was banned. Because of this, the city’s Catholics had to develop their own hidden churches.
Posthoornkerk (Post Horn Church) was one of those churches, and had a secret tunnel that went under the canal into the bar’s basement in case authorities came barging in.
While the church no longer exists, you can still go see the tunnel which has the entrance at the top of the stairs. The bar is also a good place to hang around for a drink after you’re done exploring.

Every Friday, at the Van Gogh museum, artistic, musical or random events are held until 10pm. You’re guaranteed that you will not get bored, as there are a cocktail bar and DJs that will spice things up. The events attract the most crowds on the first Friday of the month. You can also just visit the museum and enjoy Vincent’s paintings, but finish your beer first.

Curious about more hidden gems such as these?

There is no better way to get acquainted with Amsterdam’s underrated highlights than by taking a private tour which introduces you to these overlooked gems. Whether you choose to experience these hidden gems by bike or walk, you will get to have authentic experiences and discover one-of-a-kind places with stories only our tour guides know. Or, reach out for a private tour with us, we’d love to show you places you wouldn’t find by yourself.