The Windmills of the Netherlands

When you think of the Netherlands, what is the first thing that comes to your mind? If you say, Windmills, you would not be the only one. For hundreds of years, windmills have been used by the Dutch (its oldest dating from 1450), and they have now become iconic to the Dutch landscape. Here are some interesting facts about the windmills of the Netherlands.

1. Once Upon a Time, There Were Tens of Thousands of Windmills

Windmills, or molens in Dutch, used to be everywhere in the Netherlands. At one point, over 10,000 pumps were spread across the country. Nowadays, only 991 windmills, 397 drainage mills and 594 industrial and corn mills have remained.

When steam power started gaining popularity at the start of the industrial revolution, it was only a matter of time until windmills were replaced with steam-powered pumps. The rest of them were either ruined during World War II, or they became dilapidated overtime.

2. What Were They Used For? 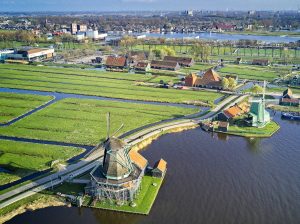 The windmills used wind energy and turned it into rotation energy. This energy was then used for many tasks, such as pumping water, grinding materials, or to produce electricity.

By harnessing the power of wind and water, the mills pounded, shredded, grinded, or mixed various types of raw materials to obtain a product.

The Zaanstreek paper mills once produced a world-renowned quality paper. It actually made the sheets on which the American Declaration of Independence was printed on.

Mills were used to process almost anything: mustard, hemp, grain, cocoa, oil, chalk, paint or saw. As mills could quickly make planks for shipbuilding, it is no wonder the Netherlands rose as a powerful maritime nation.

Amsterdam actually housed the first industrial estate in the world which consisted of 23 sawmills on Kostenverlorenkade. One of these mills, called the Otter, still exists even to this day.

During Holland’s history, windmills had many purposes. But the most important was probably that of pumping water to drain the lowlands and return it into the rivers over the dikes to create farmable land. In the fourteenth century, a type of mill which had its post hollow was used to drive scoop wheels in order to remove the water from the wetlands. The mills were also used to keep the water from flooding the existing drylands.

3. The Industrial Revolution Began with Them

The mills in the Zaanstreek region (just north of Amsterdam) provided sawed wood used for making the country’s shipbuilding industry blossom. This resulted in the world’s first genuine industrial zone. By the middle of the 17thcentury, Zandam produced over 75 ships annually. Even Russia’s Tsar, Peter the Great, came to Zaandam to see how ships were made.

4. You Can Spot Windmills Even in Amsterdam

You do not have to wander far from Amsterdam to see some windmills. A 20-minute trip from the Dutch capital will lead you to several in a row. If mill spotting is not enough, you can even go inside them and see up close how they work.

Windmill spotting is an excellent way of escaping the crowded city and just enjoy a picturesque and serene Dutch countryside. The Private Windmill and Countryside tour takes you to the famous windmills of Zaanse Schans and a working industrial mill. The tour also includes a trip through the Keukenhof fields with tulips in all colors.

5. The Windmills Were Cryptic Messengers

The sails of a windmill could be positioned in order to send messages, such as the death of a loved one, festive events like a wedding or a birth, periods of inactivity or to call someone over to the mill as fast as they could. During World War II, sails were also used to warn the locals if the Nazis were coming.

6. Windmills Made Their Way into the DutchLanguage 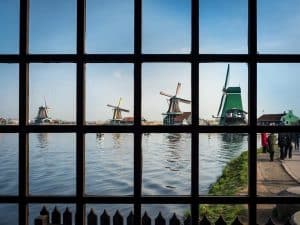 Windmills did not only influence the evolution of the Dutch nation, but their language as well. There are several expressions with pumps, such as: Met molentjes lopen (walking with windmills) and A klap van de molen hebben (to be hit by a mill) both meaning to be a little crazy. The saying Alle molenaars zijn geen dieven (not all millers are thieves) suggests that some millers might have been less than honorable.

During the 17th and 18th centuries, windmills became a popular motif in many Dutch landscape paintings. Famous Dutch artist Rembrandt, which was the son of a miller from Leiden, painted a powerful scene depicting a windmill. Besides a broad moat, the windmill stands tall over the landscape. The last rays of the sun give its sails a radiant glow as a dark, ominous cloud.

17th-century paintings that depicted windmills meant more than just a picture that looked nice. They were the nation’s symbol of strength, security, and resilience. They were responsible for keeping the soil dry and helped the people in making the food and items they needed. According to the experts at the National Gallery of Art, Washington, Rembrandt’s mill represents the quiet aftermath that settled after the Dutch fought for their independence from Spain.

in 1871, French impressionist painter Claude Monet visited the village of Zaandam, the scenic little town situated near Amsterdam. While there, he painted 24 illustrations of the surrounding views. He was very impressed with the beauty of Amsterdam’s houses and windmills, mentioning, in a letter to his friend, Camille Pissarro, that: There is enough here to paint for an entire lifetime.

Monet’s painting Windmills near Zaandam shows pumps that look like they have been painted from a boat out on the water. Their orange sails contrast against the grey Dutch sky. He used a limited range of colors to mimic the style of contemporary Netherlandish landscape painters and to best convey the dreary atmosphere. When Van Gogh saw Monet’s paintings in Paris, he was very impressed with his work.

If you’re visiting Amsterdam or any other place in the Netherlands, do not miss the chance to visit at least one windmill, maybe in our famous