The Spaarndammerbuurt is an often forgotten neighborhood. It lies just above the train rails and is rarely explored. Too bad, because it has a lot to offer. In this walk, we will see art, modern and older architecture and some great restaurants. A few of the restaurants are located in some of the strangest places. This walk is not only good to lose calories, but also shows you alternative experiences in Amsterdam. This is one of the longer walks though, so make sure you wear some good, feet-hugging shoes and let’s go!

Anne&Max offers a home-like environment where you can chill, enjoy a coffee, do some work, have lunch and breakfast. You are able to drink on the big reading table and on one of the comfortable sofas. Their products are sustainable, fresh and seasonal. Anne&Max also offers a silent space for the hard workers that come to visit. This is the perfect place to get a coffee. Make sure to hop in for a quick coffee break.

Highlight A: The Pillars

This artwork by Egidius Knops displays two pillars. One is standing straight, whilst the other hangs to the side. The leaning pillar seems to be supported by white bands, bound around both pillars. This abstract artwork was made in 1985 and was moved around the West side of the city. Since 2010 Spaarndam has been its home. Scan the QR code on the ground for more information.

Cafe de Walvis is not your typical old brown cafe. The cafe seems a little darker, containing a lot of wood and is perfectly ‘oud hollands gezellig’, showing soccer matches on the big screen and offering the perfect place for a ‘borrel’. Except that the cafe is only 8 years old and so it has a modern twist to it. The cafe tries to include everyone, young and old, as is reflected on the cafe’s menu. They serve typical Dutch foods, but also options with a vegan or vegetarian twist. Whether you want to get a beer from tap or bottle, prefer coffee or wine, meat or vegan, this cafe has it all.

This relatively new building really splits the crowd. Some really like it, some really don’t. Known for looking like the Dutch Arc de Triomph as well as for looking like a gigantic toilet seat, this building has become a prominent part of the city skyline. One part of the building looks a little different than the rest, containing a triangle structure. This part of the building was supposed to hold the biggest and most expensive apartment in the city, at least that was the plan of the architects. Pretty soon after the start of the construction of the Pontsteiger, an Amsterdam businessman found a loophole. He bought the gigantic apartment, divided it into six smaller, but still considerably huge apartments, which he sold on, to the disappointment of the architects.

Pont 13, an old ferry that used to cross the IJ water, was almost demolished in 2005 but saved last minute by the owners of the now successful restaurant. Its unique appearance creates a great setting for lunch or dinner, but also a beautiful event setting and is often used for weddings. The menu offers something for everyone, but they are famous for their link with the water and grill food. Pont 13 is also known for its amazing chocolate cheesecake.

The interesting white and red structure you can see in the water is the REM Eiland. This structure was originally constructed in the North Sea. REM Eiland was the operating station of the Reclame Exploitatie Maatschappij (Advertising Exploitation Company). They wanted to offer commercial radio and television senders. Since this was not allowed by law (this was in the 1960s) they decided to work from the sea instead of the land, so they officially did not work inside the Dutch borders. The government was not happy with REM and created a new law prohibiting construction like REM-island and boats from broadcasting in the Netherlands. The building was deconstructed and later placed here in Amsterdam where it functions as a restaurant and entertainment center. 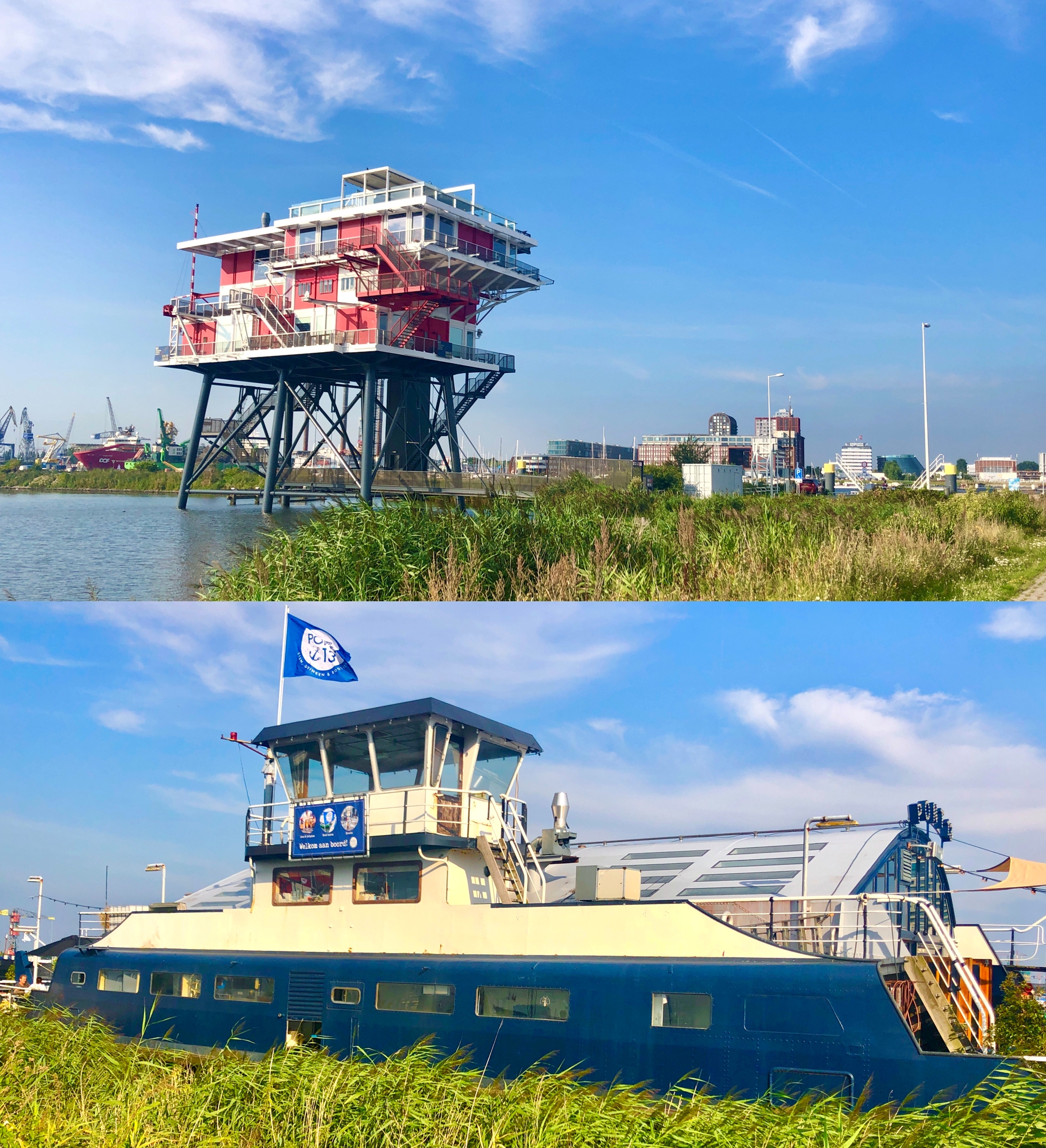 Tuinpark Zonnehoek contains over 70 allotment gardens. Amsterdam is pretty cramped, and most people don’t have the luxury of a garden or a nice roof terrace. That is why the city has allotment gardens, so people can still have a gardening experience. Zonnehoek was founded in 1953. The average size of a garden is 250m2. Every two gardens share a small garden house, which are evenly distributed over the garden park. You are able to visit the park to walk and look around, but the gardens themselves are private property. Still, it is interesting to see how the Amsterdam city people create their tiny escapes into nature.

Het Schip is probably one of the most famous examples of the architectural style known as ‘Amsterdamse School’. Het Schip (The Ship) is one of the three building blocks along the Spaarndammerplantsoen. This block contains some residential buildings and since 2001 a museum, called after the structure. The museum has furnished some of its rooms like the original residential houses were furnished in the ’20s of the last century. The museum also hosts different exhibitions and workshops throughout the year.

This monumental building used to be a bathhouse and was built in the beginning of the last century. The bathhouse was widely used because most houses in this area did not contain any sanitary facilities. Most people cannot imagine a time where houses did not contain such facilities, but something as simple as a bathroom is a modern luxury. It was not until 1965 that bathrooms became mandatory by law in newly constructed residential houses. This bathhouse is currently not in use. New plans to transform it into an apartment complex have just been introduced. Of course, seeing that it is a monumental building, the architects try to keep part of the old construction.